The people of agrarian community of Ikota in Ifedore local government mainly youths have staged a protest against purported selection and alleged imposition of Mr Babajide Victor Akinloye as the traditional ruler of the town by the Ondo state government in clear violation of customs and chieftaincy Law. 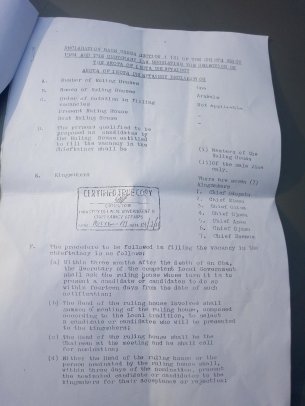 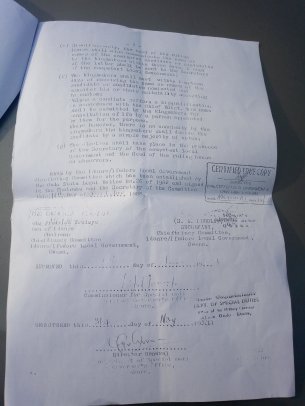 The youths armed with leaves and placards, alleged that Akinloye was not a native of Ikota and his mother who hailed from the town was not a member of Akota Ruling House and described the purported appointment of the monarch as a violation of The Chiefs Edict 1984 on Ikota Chieftaincy Declaration.

The Akota’s stool became vacant after the demise of Oba Samuel Ajisafe who joined his ancestors in 2007.

The protesters led by the President, Ikota Progressive Union (IPU), Chief Ebenezer Olorunfemi, the Community’s Women Leader, Mrs Kikelomo Ajisafe and Ikota Youth Leader, Akinsanmi Fadairo, lamented that the appointment of Akinloye whose father is a member of Odopetu family in Akure, had caused anxiety among residents because they viewed the government’s action as an affront to their tradition.

The protesters accused the Speaker of the State House of Assembly, Mr Bamidele Oloyelogun of abhorring and influencing the imposition of Akinloye on Ikota’s people.

The people maintained that Ifedore local government in a letter dated November 16, 2016 marked: ILG/879/Vol.II/167 and addressed to the State Government, had confirmed that out of the two contestants to the Akota’s stool, Prince Adewolu Badejo is from male lineage to the throne while Akinloye is from the female lineage and under the Chieftaincy law only male lineage has a right to the obaship throne. 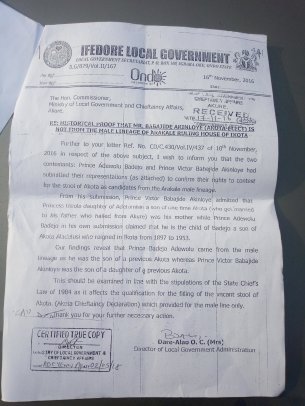 The protesters said, “Our disbelief and shock were premised on the fact that the said Babajide Victor Akinloye is an indigene of Akure, he doesn’t belong to Ikota ruling house, only his mother is our town, even the mother is not from the royal family. The Chiefs Edict on Ikota Chieftaincy clearly exempts non-indigene and non-male lineage of Arakale Ruling house from the Akota’s stool”.

The protesters in a write up made available to newsmen, insisted that, “Akinloye himself admitted he is not from our town, we don’t know why he is being sponsored by Oloyelogun to cause unrest and traditional crisis in our town, the entire Ikota people are fully behind Prince Badejo to become Akota and anything short of that, we will not allow an impostor to lead us”.

They said “We appeal to Governor Oluwarotimi Akeredolu to call Oloyelogun to order and advise the state government to act on the local government’s said letter and relevant Chiefs laws to set aside the purported appointment of Akinloye and install Badejo as Akota for a lasting peace in our community that is rich in cash crops”.

Addressing the protesting youths, the Regent of Ikota, Princess Adun Ajisafe while corroborating that Akinloye was not from the Royal family, called for calm as necessary government’s organs were working hard to redress the injustice the imposition might have caused in the town.

All efforts to get the reactions of the embattled Oba-elect proved abortive while the calls to telephone lines of the Commissioner for Local Govt and Chieftaincy affairs, Mrs Lola Fagbemi were not reachable.

Calls to cellphone of Oloyelogun were also not picked.

Newspaper is your news, entertainment, music fashion website. We provide you with the latest breaking news and videos straight from the entertainment industry.
Contact us: contact@ebonyherald.net
© Designed by Correct Marketer
You cannot print contents of this website.